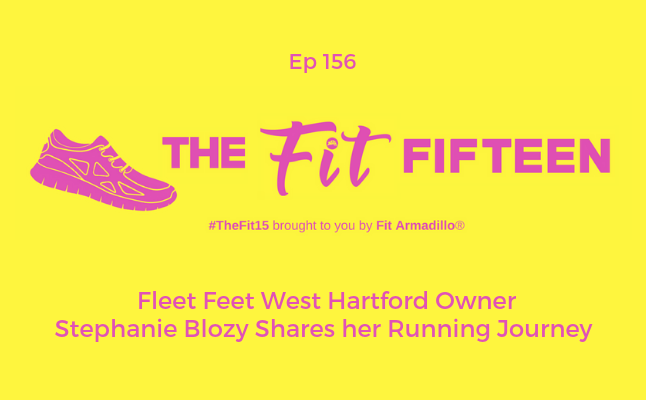 Stephanie Blozy's inspirational running journey has taken her from a career as a meteorologist to the owner of a Fleet Feet running shoe store. Tune in to hear how she got into the sport as a kid, but later had to restart her running journey after an autoimmune disease diagnosis kept her out of her running shoes for 7 years. Her second act of running has included several marathons from the Marine Corps to Boston to the North Face Endurance Challenge 50K ultra. We also talk about her newest fitness love, CrossFit. This episode is part one of our conversation which will be continued in episode 157. Tune in then for running tips from Stephanie. Stephanie began running as a kid, following in the footsteps of her dad (who, at that time, ran in cut-off jeans and Converse sneakers). She competed in her first race when she was 5 years old - beating a local radio personality.

In 1995, Stephanie was diagnosed with Lupus and stopped running because her doctors told her she needed to save her energy. Seven years later her sister, Carrie, encouraged Stephanie to join her for a

While just a 1-mile jaunt around their neighborhood, that run felt like the missing prescription to help Stephanie feel strong enough (physically and mentally) to fight the disease and gain back her life. Realizing the power that running has to change lives ultimately inspired her to switch careers so she could help others, especially kids and those new to running, reap the rewards of a healthy lifestyle and do what they thought wasn’t possible.

That short run was followed by many more as the sisters embarked on a journey to train for the Marine Corps Marathon together - a race they completed in the fall of 2002 with their dad. Five marathons later, Stephanie finally qualified for Boston and had a memorable run through those storied streets in April 2009. Her dream of running an ultra marathon came true in 2012 when she completed the North Face Endurance Challenge 50k that featured an epic river of mud 16 miles long!

Today, Stephanie has added CrossFit to her training regimen as a way to increase mobility and core strength, as well as build power and endurance so she can run into old age!.

How to Escape Locally with Swimply CEO Bunim Laskin