Ep 136: The Best Beef Jerky in SoCal | Jerky Chef Jeff Gaskin – Fit Armadillo
YOU deserve the freedom to tone up on YOUR terms! Sign up to start enjoying LIVE 1-on-1 fitness sessions TODAY  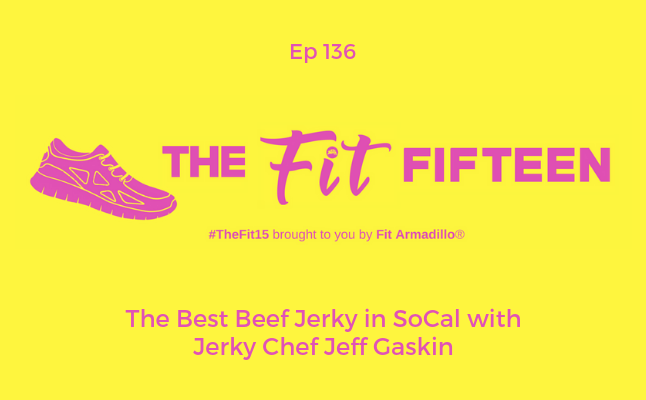 Looking for the best beef jerky? If you're living in Southern California, you're in luck! Guest Jeff Gaskin has started making healthy beef jerky in Manhattan Beach and stops by to tell us all about it. He shares why he started eating beef jerky and his journey from jerky fan to jerky chef. Jeff also shares a tasty, healthy recipe that you can use to get your kids to eat more veggies. Wondering if beef jerky is really a good snack choice? Head back a few episodes (episode 116) and you'll hear registered dietician Amy Myrdal Miller recommending it as a healthy snack. For jerky orders email Jeffgaskin@hotmail.com. Jeff moved to Los Angeles a few years ago from Vail, Colorado, where he was a local news anchor and reporter, as well as the coach of the high school hockey team in town. He played a lot of sports his whole life, and remains active, but have found that as

he approached his late 30's, his metabolism was nowhere near where it used to be. His go to snack in his teens and 20's was a huge bowl of white rice doused in soy sauce, washed down with a 44oz Slurpee! Not so much anymore. He had to start eating healthier, and so he began snacking on the protein rich, low fat and low sugar beef jerky a lot, instead of chips and candy. Sadly, though, he noticed there were a lot of preservatives and nitrates in the majority of the jerky brands he was buying from stores. He was also spending a lot of money on it. When Jeff's girlfriend got him a food dehydrator for Christmas in 2016, he became obsessed with figuring out how to make the best tasting, but also healthiest beef jerky possible, and see if he could save money in the process. It has been a fun and tasty couple of years of testing and refining my flavors and methods; but now he's now confident he can make 8 of the best varieties of beef jerky you've ever tasted! From traditional garlic pepper and teriyaki to spicy honey mustard and orange ginger flavors, also available in chicken or salmon, there's something on his jerky menu for everyone. He even makes a "naked" variety, which makes a great treat for dogs, and he guarantees they will go crazy for them! If anyone would like to find out more, or give some of Jeff's jerky a try, they can reach him at Jeffgaskin@hotmail.com. Jeff makes each order fresh, which takes about 2-3 days to complete to perfection, but it's worth the wait! He's happy to deliver to anywhere in the South Bay, as his trusty adorable husky sidekick, Moose, loves going for rides and making deliveries with him! Website coming soon.

Jeff Gaskin stops by @FitArmadillo #PodcastShow @thefitfifteen to share his #BeefJerky story! Learn how to get your hands on the #BestBeefJerky and parents check out a #HealthyRecipeIdea to help your kids eat more broccoli!  #HealthySnacks #SouthBayEats #SoCalEats