About Reason2Race with Co-Founder Gabrielle Baumeyer – Fit Armadillo
YOU deserve the freedom to tone up on YOUR terms! Sign up to start enjoying LIVE 1-on-1 fitness sessions TODAY  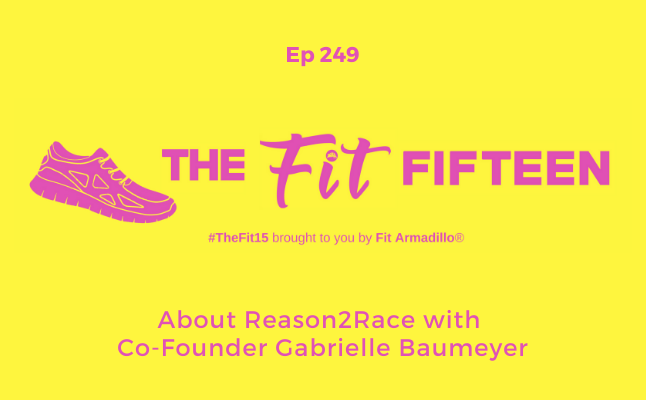 ​Looking for help finding your fitness motivation while supporting a favorite nonprofit? Reason2Race Co-Founder Gabrielle Baumeyer shares more about her company and how it helps both individuals and corporations raise money and awareness for nonprofits.  She and her husband Bill launched Reason2Race in 2010 after several years of personally experiencing the power of fundraising for her own athletic events. Supporting others in achieving their goals is truly Gabrielle’s passion as evident in the results Reason2Race has achieved. Over 6,500 individuals have completed approximately 700 events and raised over $6 million dollars for local and international causes. During these challenging times, Reason2Race might be able to help your favorite nonprofit! Tune in for all the details and to get inspired. Gabrielle Baumeyer is President and Co-Founder ofReason2Race LLC, a company whose mission is to empower individuals and organizations to make their community impact. A graduate of the University of Texas atAustin, Gabrielle is an engineer by study but decided to follow her passion and fulfill her longtime goal of making a significant contribution in her local and global communities.

Since the age of 15, she has had her sights on achieving big goals not only in the athletic arena but in the social sector as well. After years of participating in 5K runs and half marathons, in 2007she completed her first triathlon and raised over $2,400 dollars for a children’s nonprofit. From that moment on, she knew that she wanted others to experience what she did that day, that any aspiration is attainable if you have a big enough “Reason2Race”.Since completing her first triathlon, each year she has selected one key event, raised funds for her focus cause and invited others to do the same. Gabrielle has participated in dozens of endurance events including the Ironman Triathlon in 2010. While training for and competing inIronman, she personally raised over $26,000 in charitable funds, once again experiencing how making a difference for others could make a difference for her. With a track record of successfully building fundraising teams competing in athletic events, she and her husband Bill launchedReason2Race in 2010.Gabrielle lives in Houston, Texas where Reason2Race is headquartered. Her primary role is to coach and guide individuals and organizations in achieving two objectives: completing whatever target event they choose and experiencing making a community difference while doing so. She not only works with nonprofits to build fundraising teams, she also works with corporations to include their staff in health and wellness initiatives that expand their community outreach efforts.Her extensive work with event race directors has also adds a new and unique way for runners/walkers to enhance their event experience, giving them the opportunity to race for the cause of their choice. Supporting others in achieving their goals is truly Gabrielle’s passion as evident in the results Reason2Race has achieved. Over 6,500 individuals have completed approximately 700 events and raised over $6 million dollars for local and international causes.Gabrielle frequently travels to her hometown of Austin, Texas to visit her family who has played a significant role in leading and being a voice for the Hispanic Community. Her family has no doubt had a strong influence on her and her commitment that people experience themselves as leaders in the world who make a difference.

How to Release the Runner with Race Director Susan Rancourt