Ep 034: Running Backwards to End Epilepsy | Boston Backwards Guy Loren – Fit Armadillo
YOU deserve the freedom to tone up on YOUR terms! Sign up to start enjoying LIVE 1-on-1 fitness sessions TODAY  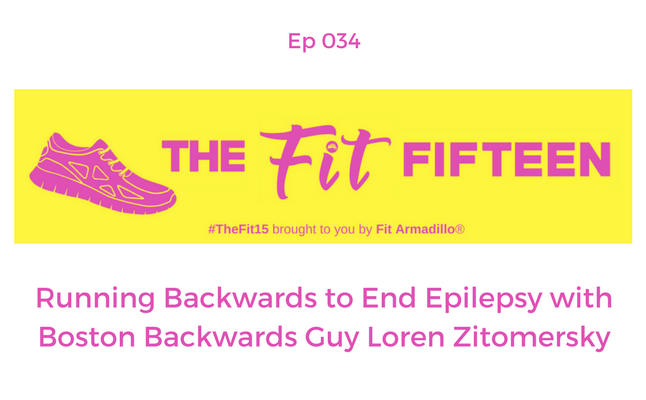 Purple Day might have been yesterday, March 26th, but we're extending the reach of this day to raise epilepsy awareness to share the story of an inspirational runner, Loren Zitomersky, with you.

When he got his BQ at the Mountains 2 Beach Marathon, Loren knew he wanted to do something different on Boston Marathon race day to raise money for epilepsy research. After some research he decided to run the 26.2 miles backwards to raise awareness for epilepsy and attempt to break the Guinness World Record.

Loren is a pretty normal guy - he's a motion picture production attorney for the Walt Disney Studios, however Loren is trying to do something extraordinary. On April 16th, he's going to be running the Boston Marathon backwards (literally turned around) and attempting to break the current Guinness World Record for the fastest marathon run backwards (currently, 3 hour, 43 minutes, 39 seconds). He is attempting this feat in memory of his brother Brian who passed away from epilepsy at the age of seven. Loren is raising money and awareness for epilepsy research and people and families affected by epilepsy, with a goal of raising $100,000.
​
Help Loren Raise Money to End Epilepsy
​Donate to Loren's page HERE

#MarathonTraining is tough enough, but running one backwards? Find out why @BostonBackwards guy decided to do this after earning his #BQ on #PodcastShow @TheFitFifteen by @FitArmadillo #FitnessInspiration #RunningTips #RunnersLife