Ep 81: How Award Winning Meteorologist Vera Jimenez Stays Physically and Mentally Fit – Fit Armadillo
YOU deserve the freedom to tone up on YOUR terms! Sign up to start enjoying LIVE 1-on-1 fitness sessions TODAY  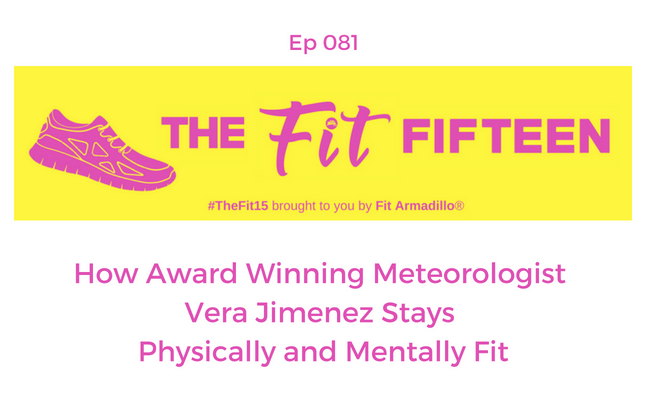 Vera Jimenez  is an award winning Meteorologist at KTLA 5 co-owner of the Hermosa Beach Fish Shop, and active in the South Bay community through the Redondo Beach Rotary, and the Hermosa Beach Women's Club. She's also a member of the Chambers of Commerce in Redondo Beach and Hermosa Beach. So how does she find the time to fit in fitness? She shares this and more about her fitness journey (plus, how you can keep your canine healthy) on the show. Vera Jimenez is a resident of the South Bay and business owner. She and her husband Brian, are co-owners of the Hermosa Beach Fish Shop. They are also Real Estate Investors. She is also an award winning Meteorologist at KTLA 5 News Monday through Friday for the 6, 10

and 11 pm newscasts. Among several awards and recognitions, she was won 3 Emmys and 3 Golden Mics.

Her broadcasting career started in radio while she was in college, then moved to television after graduating from Cal State Long Beach cum laude. Her first job was at ABC7 Eyewitness News as the morning drive traffic anchor. She was recruited to go to CBS where she worked for six years. There she began filling in doing the weather. At that point, she realized she needed to go back to school to understand what she was talking about, and most importantly to accurately explain to viewers what they needed to know about their specific microclimate. After the three year program at Mississippi State University was completed, she was offered the position of prime time meteorologist at KTLA5 News, where she has worked for the past eight years.

When she's not working or volunteering she is spends time practicing physical and mental fitness, through various forms or exercise and meditation.