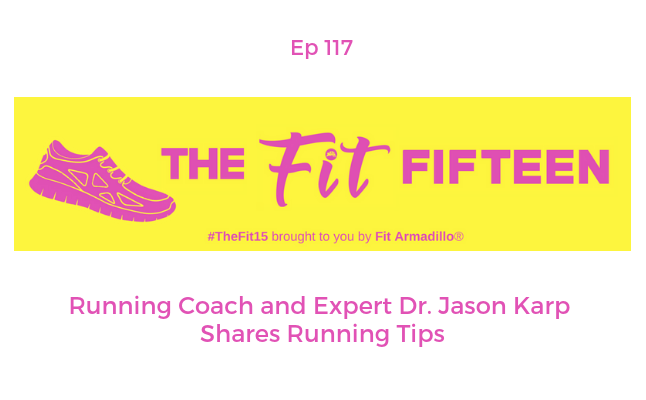 Want to become a runner, a better runner, or better running coach? You'll love today's guest! Runner and exercise physiologist, Dr. Jason Karp, shares running tips backed by science. Learn whether or not running is bad for your knees, if jumping on the keto diet bandwagon will help or hurt your running, how to prevent running injuries and more. Dr. Karp's passion for the sport of running is highly contagious! He'll be coming back to the podcast tomorrow to share running tips for the marathon so don't forget to subscribe so you won't miss it. While you wait? Be sure to follow Dr. Karp on social media or pick up one of his eight books to take your fitness routine to the next level. It started with a race
around the track in sixth
grade in Marlboro, New
Jersey. Little did Jason
know how much it
would define his career
and life. A Brooklyn,
New York native (you
can take the boy out of
Brooklyn but you can't
take Brooklyn out of the
boy), he grew up playing
baseball and soccer and

running track. It was intoxicating. The passion that
Jason found as a kid for the science of athletic
performance (one of his earliest questions was how
baseball pitchers throw curveballs) placed him on a
yellow brick road that he still follows all these years
later as a coach, exercise physiologist, author,
speaker, and creator of the REVO2LUTION
RUNNING(TM) certification program for coaches
and fitness professionals around the world.
Dr. Karp has given hundreds of international
lectures and has been a featured speaker at most
of the world’s top fitness conferences and coaching
clinics, including Asia Fitness Convention, Indonesia
Fitness & Health Expo, FILEX Fitness Convention
(Australia), U.S. Track & Field and Cross Country
Coaches Association Convention, American College
of Sports Medicine Conference, IDEA World Fitness
Convention, SCW Fitness MANIA, National Strength
& Conditioning Association Conference, ECA World
Fitness Convention, and CanFitPro, among others.
He has been an instructor for USA Track & Field’s
level 3 coaching certification and for coaching
camps at the U.S. Olympic Training Center.
At age 24, Dr. Karp became one of the youngest
college head coaches in the country, leading the
Georgian Court University women’s cross country
team to the regional championship and winning
honors as NAIA Northeast Region Coach of the
Year. As a high school track and field and cross
country coach, he has produced state qualifiers and
All-Americans. He is also the founder and coach of
the elite developmental team, REVO2LUTION
RUNNING ELITE.

A prolific writer, Jason is the author of eight
books: The Inner Runner, Run Your Fat Off, 14-
Minute Metabolic Workouts, Running a
Marathon For Dummies, Running for Women,
101 Winning Racing Strategies for Runners, 101
Developmental Concepts & Workouts for Cross
Country Runners, and How to Survive Your PhD,
and is editor of the sixth edition of Track & Field
Omnibook. He has more than 400 articles
published in numerous international coaching,
running, and fitness trade and consumer
magazines, including Track Coach, Techniques for
Track & Field and Cross Country, New Studies in
Athletics, Runner’s World, Running Times,
Women’s Running, Marathon & Beyond, IDEA
Fitness Journal, Oxygen, PTontheNet.com, and
Shape, among others. He also served as senior
editor for Active Network.

Dr. Karp is a USA Track & Field nationally-certified
coach, has been sponsored by PowerBar and
Brooks, and was a member of the silver-medal
winning United States masters team at the 2013
World Maccabiah Games in Israel.
For his work and contributions to his industry,
Jason was awarded the 2011 IDEA Personal
Trainer of the Year (the fitness industry’s highest
award) and was honored with the President’s
Council on Fitness, Sports, & Nutrition
Community Leadership Award in 2014.

Dr. Karp received his PhD in exercise physiology
with a physiology minor from Indiana University
in 2007, his master’s degree in kinesiology from
the University of Calgary in 1997, and his
bachelor’s degree in exercise and sport science
with an English minor from Penn State University
in 1995. His research has been published in the
scientific journals Medicine & Science in Sports &
Exercise, International Journal of Sport Nutrition
and Exercise Metabolism, and International
Journal of Sports Physiology and Performance.